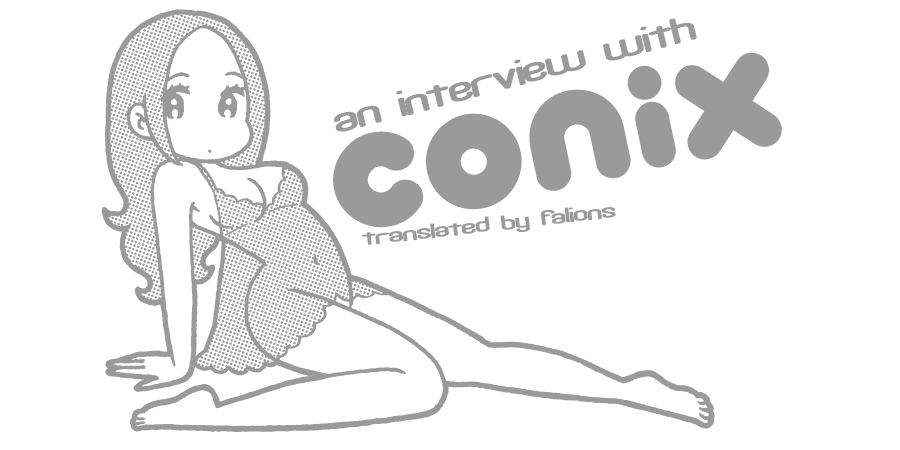 How was the cute yet sexy style of conix born? We watched closely as they were drawn before our very eyes to uncover the secret.

It’s all in the lines

It seems to me that the expressive combination of cute and sexiness in your drawings is characterized by the lines you choose. How did you establish this style?

Originally I was working as a graphic designer, but I enjoyed drawing so much more than the graphic design, so I started working on illustrations then too. At the time I was doing work to express the seasons through symbols, and I found myself using simple lines to create an iconographic representation of each season. I think that’s really where it started.

Your experience as a graphic designer really comes through in your work, doesn’t it?

Yes. By doing that kind of work I became better and better at identifying which kinds of lines were the most pleasing to look at, and while the symbolic expressions of my work were characterized by those simple lines, I wanted to take it an extra step further and use even softer and simpler ones. I think that my current style is a really fine-tuned result of this desire.

How do you usually start working on an illustration?

First I draw a simple draft with a pencil on a sheet of paper and then trace over it on a thin sheet with a marker. I do this to find which lines from the original draft are unnecessary and repeat this process over and over until I find the lines that suit the feeling I’m going for best.

When you’re looking for the “right line,” does it come out naturally in the rough draft? How do you apply them?

Yeah, I basically follow my instincts. When I find the right lines I transfer them all to the main paper and see the result.

The rough draft is always on paper, right?

I sometimes draw the rough version on my iPad, too, but most of the time it’s on paper. Some lines you can only get when drawing on real paper, as it registers subtle movements of the hand a digital device can’t. I find that when I draw digitally I hit the undo button too often and the naturalness of my work disappears… that’s why I like drawing analog the most.

On the sexuality of the subject

When looking at the drafts for the cover illustration, I was surprised by the sheer amount of poses you were able to draw so quickly. How do you come up with the variations?

I generally aim for an S-shaped pose that accentuates women’s features. In doing so I make little variations to the positioning of the head and hands, for example, in order to achieve that S-shaped posing in different ways. If you want to see a good example of that kind of posing, I think Osamu Tezuka’s women are almost always drawn with that in mind. I think you can definitely see the impact of his work on my own illustrations.

Do you use any pose references, like gravure idols?

I like to use figurines more than photographs. These days they’re pretty well made, so you can manipulate them into a lot of different poses and make them look cute from any angle.

You also like to use a lot of different hairstyles, don’t you? I think their personality comes through in the way it’s cut.

I study hairstyles in magazines, observing women in the city, and looking at Instagram. Also, because the types of girls I draw are often in swimsuits or underwear, it’s only through the hairstyle that I can really express their personality. I also have a friend who is cosmetologist who’s gone through a ton of different hairstyles, so I’m very keenly aware of just how greatly the atmosphere of a person can change with their haircut alone.

Do you decide the hairstyle before you start drawing, or does it come naturally with the pose?

In the case of drawing long hair, I have to consider how it will flow down, as its shape can really change the feeling of an illustration. There’s a certain balance you need to find between the hair and the kinetic nature of the drawing itself. I think you can really see that in, for example, Fujiko Mine from Monkey Punch’s Lupin III, as her character is really expressed by the way her long hair flows.

The girls you draw are very sexual in nature, but they possess a certain simplicity and freshness to them that I think even the average viewer can appreciate. Is this balance something you consciously try to achieve?

I think that kind of balance is something inspired by Rumiko Takahashi's work. Takahashi-sensei’s drawings are also very bright and her women are drawn cutely but they appear glamorous. However, many female writers like Takahashi-sensei tend to write strong-willed women who embody that typical literary trope of being glamorous on the outside but struggling underneath. While I’m sympathetic to that type I tend not to emulate that aspect of her style because I personally am not that type of person, so the way I portray women is simpler as a result.

I see. When you put it like that, I can really see that the women you portray are lacking that typical literary seriousness within them. It seems that because of their lighthearted appearances, they don’t necessarily evoke any sexual thoughts even if they’re posing provocatively in their underwear.

I certainly think so. The girls I draw aren’t hiding anything and seem to be having fun, I'd say (laughs). I think it’s mostly my own personality coming through rather than consciously aiming for some sort of ideal of lighthearted eroticism.

Conix is a Tokyo-based illustrator and manga artist. Her works include “Aohoshi Cheer Squad isn’t as cute as you think!” (KADOKAWA) and various original goods and illustrations. Conix has gained widespread acclaim both in Japan and abroad.